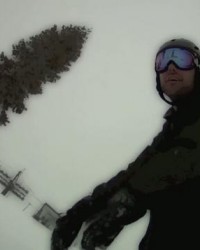 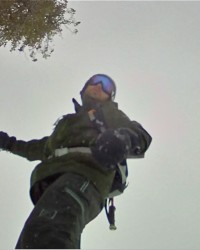 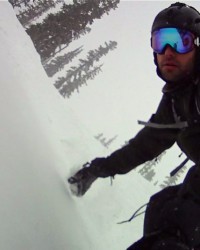 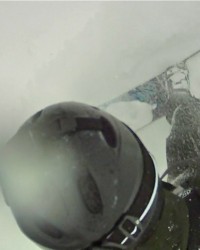 I got home on Monday night from Andy’s wedding in Atlanta, and was tracking what looked like it could be a decent storm, despite the fact that it was April 26th. Sure enough, the 6″ they were expecting turned into a foot, and then they got another foot and a half on top of that for 29″ total. I played around with some different camera mounts – on the nose of the board (I was on the Neversummer Summit 169, so the nose was way out there), on a trekking pole on the front of the board, on my pack, and hand held – all to varying degrees of success. I think this was my most successful video editing to date, I managed to get the action mostly synced to the music, and the jerky nature of it kinda fits with the banghra/hip hop. Threw a cartoon filter on it, and bam! it looks kind of like a video game.

The snow was great – light and fluffy, and even a little soft underneath – so Javier and I had a pretty good day overall. I tried to get home, but it was still dumping and 80 ended up getting closed in Truckee. It took me nearly 2 hours to get to there, so I just turned around and headed back to the house to get in one more day.