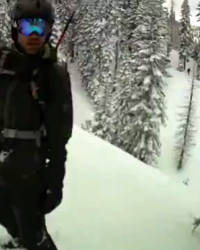 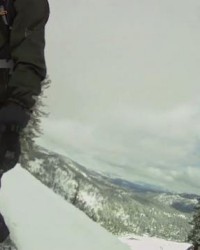 I tried to leave Tahoe and get back to San Francisco, but after it took me 2 hours to get to and sit in Truckee, the road finally just shut down and I was stuck. It didn’t make sense to just hang out, and after I confirmed that Steve was headed up to Squaw that night, I backtracked to the house to spend the night.

I woke up relatively early and headed over to Squaw, and Steve was nice enough to provide a free lift ticket. Slow going in the Special Tickets line made me miss first chair, but I still managed to get out pretty early. The snow was a little beat up over Friday, but there was more on top and overall really good. We mostly stuck to Red Dog before dipping over and poaching Squaw Creek… and we weren’t the only ones. My video taking was pretty weak, and I was mostly just trying to get in as many laps as I could before I had to leave. These are a few of the Squaw Creek runs, with Red Dog Ridge at the end. The bus back from Squaw Creek had something like 25 people on it, and I want to say the capacity was 14. Overcrowded would be a good description, but again, it was worth it. I had to take off just after noon to head back to the City, but not bad to get another sweet powder day so late in the season.