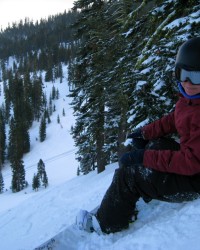 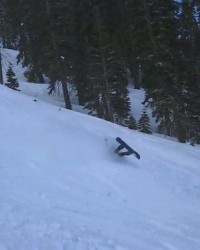 Since I had just gotten back from Alaska, and there wasn’t much promise of snow, and there were things to be done in the city, Reagan and I didn’t head up to the house until Saturday. The forecast changed a bit, and it did snow, so we didn’t really even get in that early, and ended up driving in the dark, but it was still a good relaxed day. Unfortunately the snow sort of passed us by (though they got 2 feet just north of us), the following day proved to be similar, and we ended up just doing a half day at Homewood. We mostly stuck to the quad and blue runs, though Reagan did dip into the trees a few times, her first time ever. After we determined that all was going well, we did a run down White Lightning, though the snow really wasn’t good enough to justify it. As you can see in the video, it was soft enough to try and jump off of smaller stuff, but you can also see that due to melting, exposed rocks at the top made it nearly impossible to stick the landing.