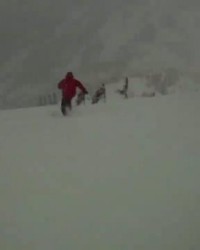 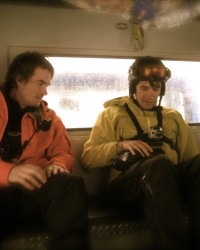 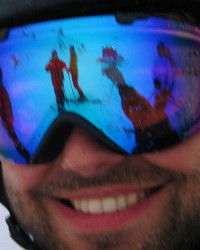 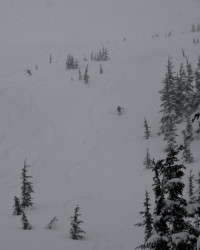 Having dropped Zachary in Anchorage and then making the drive back to Girdwood (a wrong turn almost put me in Wasilla), I was all ready to go on a heli trip with Chugach Powder Guides. The weather had been going back and forth, and when I went to bed it looked like we might have flying weather lined up. I got up at 6:30am to get ready so I could get some food and still be on time for our 7:30 check in, however looking out the window I wasn’t all that optimistic. The sun wouldn’t be rising for several more hours, but I could tell that it was pretty thick out there, and with the clouds it didn’t seem like it was all going to happen. Sure enough, the helicopters were on hold due to weather (the tree line is so low they have to use their own shadow when landing, so no sun = no flying). I was bummed, since I was really looking forward to another heliboarding trip, but Mother Nature had other plans.

The plus side is that when you can’t fly, you can go cat skiing, and the weather means you are more likely to get more fresh. After the sun was up, we seven of us and two guides departed at 10am to get in some turns. The wind had been blowing, which resulted in some pretty buffed snow – soft underneath but with a definite crust on top. I had the Malolo set all the way back in anticipation of steep and deep powder, and the combination of it with the snow caused me to have lots of trouble early in the day. My tail was riding so low I couldn’t keep my speed up, and when I shifted my weight forward, my nose would dive in and down I would go. I was starting to get pretty self conscious about it all, and one run in particular would have been really bad had not both guides and 4 of the other people had “issues” with it as well. We stopped for lunch 4 runs in, and I took the opportunity to move my back foot up a little. Meanwhile, it kept dumping snow.

It could have been changing the binding (it helped). It could have been that the snow got a lot better (it did). It could have been mental (some surely was). It was probably a combination of everything. After lunch, we got in another 6 runs and everyone starting killing it. I got to drop some cornices that had formed on some of the rocks, one of them being about 10 or 12 ft that I actually didn’t see coming, and landed them all – though some were definitely smoother than others. My whole day was made on one run though – Brad went first on skis to put in some cuts and got to follow behind him. The run went left, with the fall line to the right, and as I approached I could see where he had gone off a little drop on to a perfect landing, and if you just stayed with it a little longer the drop got a lot bigger. Having a perfect view of it I came in super fast and launched off the biggest part, easily clearing the wind well underneath and sticking a sweet landing. I didn’t think I was in view of anyone else, and just bombed it the rest of the way to the bottom, where I met Brad. He immediately said “come over here” and the first thing that went through my head was that I had done something stupid and was about to get a reprimand, but the next words were “high five man, you went huge off that”. It was awesome.

When we wrapped up the day we had done 10 runs, and I was dead tired. We went for a few beers at the lodge, and then I made the trek back to Anchorage to sleep and pack for the flight the next day. When I pulled the rental car up in front of the hotel, my left leg was so weak I had to pick it up with my hands and throw it out of the car. I slept well that night.