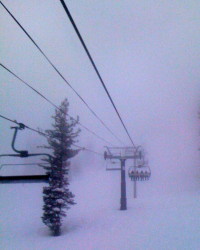 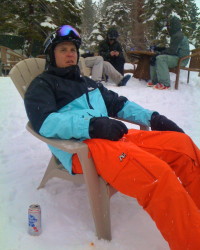 Weather forecasts showed some pretty intense precipitation coming in off the Pacific – an El Nino system from the south, which meant that temperatures could be on the warm side. We crossed our fingers, and Jay and I beat the storm by making the drive on Thursday, and then worked from home on Friday when it turned out to be rain, pretty much all day. The main excitement came from having some guys come by to check out the cornice hanging off our roof over the deck. Once it was determined to be a rather large hazard, he almost tried to jump out of a window onto the roof, which I’m pretty sure would have resulted in death. He thought better of it and they ended up going to get a ladder. It made a spectacular crash coming down.

Things turned over around 6 in the evening, and it was snowing pretty hard by the time most people arrived at the house. I heard from someone on a lift that their friends had left San Francisco at 6pm, and hadn’t arrived until 4am due to I-80 being closed near Colfax. We did what you do on a powder day, and everyone was in bed by 11:30.

We woke up to a report of 12″+ at Alpine, so we got over there and onto the mountain as close to 9 as we could. Andy and I went to do a few laps on Summit Six, and the visibility was some of the worst I’ve ever seen on Ward Peak. Literally 10ft, and the flattest light there can be. Andy ended up riding up the berm at above Wolverine Bowl, and I wouldn’t have seen it coming either if not for Andy’s bright ass new pants. We eventually rode down blind until it cleared, then opened it up on the powder. Andy had a nice line into a bomb crater, followed by two full somersaults, before riding out of it. More runs through Promised Land gave way to untracked powder late into the morning where we met up with Che and Roger, and by the time afternoon rolled around we were pretty spent. Sherwood runs and relaxing at the Ice Bar fit the bill, and we met up with Jay, who was also pretty exhausted.

We grabbed a few beers at the lodge, then headed back to the house for the hot tub, two more losses for Andy at spades, and then a deep sleep.