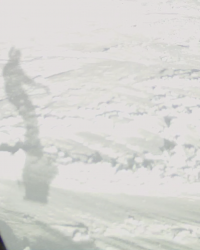 I drove up to Tahoe super super late on Thursday night after dinner with Reagan, Deb and Kyle as Sushi Bistro. I actually even arrived late there, since I had to drive up to DemoSport in San Rafael first, and of course the traffic was horrendous with the rain. I didn’t even leave until 11:45, then had to plow through unplowed roads to drop of bindings for Dan in Tahoe Donner before heading to the house. I didn’t lay down until nearly 4am (after putting some laundry on), and yet still managed to get up at 9am, and out on the hill by 10. The call was for Alpine, since that’s where Andy, Javier, Adam, and Scott were riding, and it ended up being a really fun day. Dropped a decent number of small cliffs – it was the first time I really felt like things were getting covered completely.