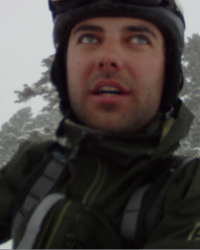 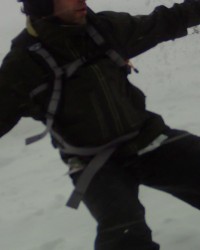 A day at Alpine with Scott, Adam, Chico, Andy, Jay and Reagan.

Friday was tiring, but that didn’t stop us from getting back out on the mountain at Alpine on Saturday, with a bit of fresh to be had. Definitely some work to move through, and some firmer areas than you would like to see, but not much to complain about either. We moved around the whole mountain – Scott Chair to Promised Land, Roundhouse up to Yellow Chair, Sherwood on the backside and over Expert Shortcut (resulting in a near collision between Scott and I, seen above, which is what you get when someone who rides regular comes back to back with someone who rides goofy), but a lot of our time was spent in Beaver Bowl. To end out the day I decided to push on over to Estelle Bowl, but being the only boarder who had attempted it, as evidenced by the lack of footprints and the uphill traverse, I ended up going all the way to Bernie’s before being able to drop in. The reward for the 45 minute hike was worth it though, and I had fresh tracks in knee to waist deep snow the whole way down.