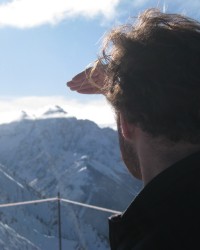 After the ass injury, I decided to not rush it the next day and met Adam and Ricardo at Aspen Highlands for a half day. Some delays in meeting up with them due to lack of cell phone coverage (and Andy getting a breakfast burrito), but we got right into things with a warm up run, followed by a hike up to Highlands Peak, with access to the bowl. It was a pretty sketchy hike along a knife ridge to the summit at 12,329ft. You could see the Maroon Bells and Pyramid Peak in the distance, and overall it was an awesome view. The sketchiness came directly from the fact that a misstep would have resulted in a 3000ish foot fall. I looked, but Adam just counted footsteps. We got some decent snow from the top, although it was a little hard to ride with my legs being tired from the climb, and my ass being generally crampy.

Adam and Ricardo on the cat for the first part of the ascent. There really wasn’t much point, but considering the undertaking, we took it. The snow was light and flaky, so a lot was getting kicked up (likely due to the fact that it was 10 degrees outside), and catching the sun.

Adam after not dying hiking the knife ridge. The hike up was just to the left of the red rock, and was quite steep, with just a rope anchored into the rock to save you if you slipped. I think it was mostly just there to make you feel better.

The Maroon Bells and Pyramid Peak are some of the most photographed mountains in the Rockies (world?), so of course we got a shot of Adam peering out at them.

The summit was much what you would expect from a summit, complete with Tibetan prayer flags.