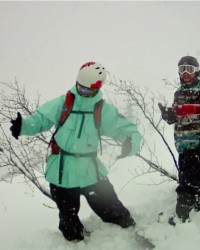 Sure enough the weather didn’t blow out, and it kept dumping snow all day. We opted in to the cat skiing once again, and did have a little bit better visibility at times to hit some pretty fun stuff about mid way up. Again we got to ski family style, and by now the snow had gotten pretty deep, well over 2 feet. Justin and I rode together a good amount again, and got to jump around in the trees (I stuck with the Malolo for a second day). I had a couple decent wipe outs going off cliffs, cornices, whatever, and was starting to think that there were no downhill landings in Alaska. I finally spotted a good drop from the bottom of the run, and Justin and I asked to do it again, and Rhett obliged. True to form, I came at it pretty fast and hear the beep-beep-beep of the helmet cam indicating that the battery has died about 10m short of the drop – which I then went off of pretty big, landed it and went tearing down the mountain. Of course, none of it was recorded, so…. I tried again and wasn’t able to land it the second time, since fog must have blown in and I didn’t even see it coming before I fell off. C’est la vie.