Heavenly, round 3. After leaving Sugar Bowl, I was headed home until I ran out of windshield wiper fluid, and had to stop in Nyack. It was snowing lightly in the pass, but a couple thousand feet lower it was a full on snow storm, complete with inches of snow on the road and wiped out cars (and trucks, as you can see). The highway ended up getting closed, so I was stuck for a bit, and ended up talking to Nicole who convinced me to head to south shore and check out Heavenly with her again. With the huge storm systems that had been rolling in all week, I assumed that they had been dumped as well, so it was a little bit of a bummer to find out they only got 45″, compared to 135″ at Alpine.

Unfortunately, my opinion remains fairly unchanged considering I still felt we hit a ton of traverses, some uphill, and overall the steep parts of the mountain were few and far between. I may still reserve judgment for a time when they actually get a decent snow pack, but I don’t make any guarantees on when that will be. 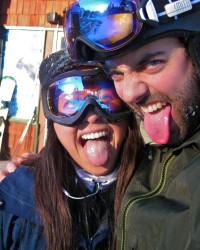