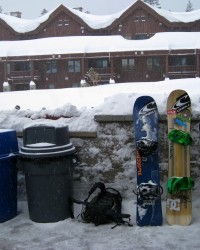 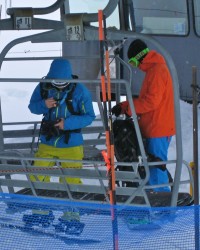 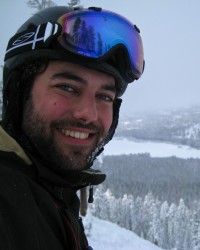 Chico and Scott had to head back to San Francisco, and after spending almost 2 weeks in the mountains and a weekend with a full house coming up, Andy and I decided it would probably be best to head home as well. Chico and Andy stayed home to finish up some work, and Scott and I headed to Sugar Bowl since they got plastered in the storm, and it is 45 mins closer to the city than Carnelian Bay.

Che was meeting up with us, so I grabbed his gear and was going to leave the keys for him at guest services. While I was dropping them off, I heard a voice that sounded a lot like Jeremy Jones, and with good reason, because it was. I knew he was teaching an avalanche safety course at Squaw, but I wasn’t going to make it, so it was cool to run in to him. Jeremy was with some other guys, some cameras, and a bunch of backcountry gear, so I just quickly introduced myself, said I was friends with Steve @ DemoSport, and that I was looking forward to his boards next year. I tried not to be a lame fan, but… who knows?

Scott and I headed straight to Mt Lincoln and did some runs down the Sisters chutes/cliffs area underneath the chair. There was a ton of snow, but it had already been pretty beat up, so we started the search for fresh pow. We eventually made it over to Strawberry Fields and even further over, where the was plenty of soft snow to be found. After Scott had to meet up with Andy and Chico to head back, I finished up the day with Che, who was headed towards the ski house before heading home myself.