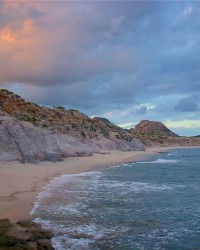 In 2001, Lindsay Salet and I took a backpacking trip through Baja California Sur. She had been on a 2 week NOLS sailing trip, and we met up in Loreto. Having only recently moved to the west coast, I still remember my first crossing into Mexico – they announced on the plane that we had left American airspace, and people immediately lit cigars and cigarettes, and kids starting running up and down the isle. It sounds pretty cliche, but apparently they just didn’t have the same restrictions at the time.

We traveled south by bus, and when we changed lines in Ciudad Constitución, Lindsay left forgot her airplane tickets, passport, money, and several other important documents in a clear waterproof bag in the pocket in the back of the seat. We didn’t realize it until we were headed towards La Paz (on our way to Cabo San Lucas) and figured there wasn’t much we could do, but a nice gentleman on the bus had a cell phone, spoke English, and a father in Ciudad Constitución. We went from expecting to lose everything, to having someone pick up the package (which was turned in to lost and found, with all contents intact) and send it to a bank in San Jose del Cabo.

Once the bag was recovered, we tried to rent a 4×4, but ended up in a golf cart sized Toyota Tercel, which I immediately drove through a river due to the recent hurricane and got stuck in the sand once the “road” became that, a few days later.

In between we stopped at the tiny town of Cabo Pulmo – at the time just 5 houses. We ate dinner at the only restaurant around, and while we were eating the kids climbed into the open air windows and went to bed on pillows. Their parents slept on the roof, since it really rains that little. We camped that night, and hiked up and down the beach the next day. This is a shot I took looking north as the sun was setting over the Pacific on the other side of the peninsula.

It’s worth noting that I also had the best fish tacos I have ever had just south of this location. I ordered 2, and a Pacifico, and when I was told to wait for a few minutes and boat beached on the shore, a few guys jumped out with some freshly caught tuna, and they proceeded to cook mine immediately.