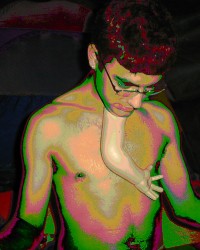 Burning Man 2001. This was the first year that Mike and Jack came along, and it was an especially dusty year. For some reason my parents had given me a baby mannequin arm for my birthday, and it seemed appropriate to bring as an accoutrement. My camera at the time, a trusty Sanyo SX112, for some reason had a issue where the colors would be distorted – or it’s entirely possible that periods of time just looked that way in the Black Rock desert.