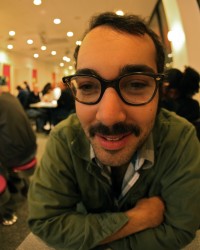 15mm wide angle fisheye of Andrew at the Majestic, 5:30am in Atlanta, GA. The moustache is the result of not shaving on the road, nose from the fishey, and the glasses are just his glasses, all resulting in an “I’m wearing a Groucho Marx” costume kind of look.

The Harpoons played a show at the Drunken Unicorn earlier in the night, at which point we made a pit stop at the Cavern before ending up at Patrick’s house. Not to be discouraged, by the late hour, we made the walk to the Majestic where we enjoyed the best grits, eggs, and hash that were put in front of me at that time.