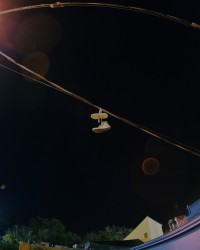 A fisheye shot of some a shoes + power line combo in the parking lot of the Local. There was some discussion as to the opening, and why I never went there when I lived in Atlanta even though it was a couple blocks from 836 Greenwood, and as it turns out the local opened at the end of 1999. Considering I was 19 at the time, and I moved to San Francisco at the end of January, I think I have a good excuse.

Some things I like in this shot: the power line in the middle is straight; the street lights put out interesting colors, the lens flare.