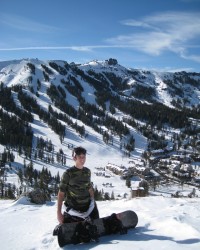 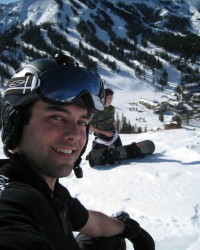 Kyle and I started of the 2010 year by sleeping in, since has been in the 40s/50s in Tahoe, but going below freezing at night. Although there had been a fire in the power room at Kirkwood, and they were only running a few lifts, we figured we might as well check it out over the other South Lake resorts. Things didn’t get off to a great start when we were told that only 2 lifts were running, and that the tickets were full priced. We decided that $72 was a bit too steep, and opted to hike up to the western facing east side of the valley. The 800 foot climb took about 45 minutes, and the descent took about 4. Earn your turns.

The day improved when they sold us a discounted half day ticket that will also be good for a full day later in the year, and opened up several more chairs. We got a few runs in on the groomers, and the snow was surprisingly good and fast. Overall it was a good early season day, though it definitely highlighted the need for snow.