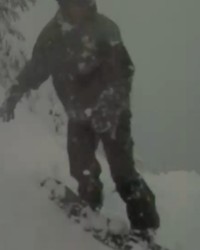 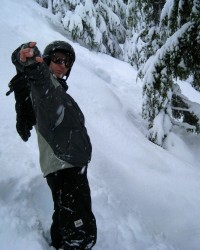 Yes, it’s true – I am in Alaska, snowboarding no less. Zachary had to be in Anchorage for work, and when one is traveling so far north in the dead of winter, and have a love of winter sports, how can you not head up early and get some riding in? The only reason I can think of (maybe), is if you have to do it alone, but with me being at the top of the “drop everything and go snowboarding in Alaska” list, here we are.

The worst part of the trip so far was waking up at 6:30am on Valentine’s Day to drive to OAK and catch a 9am flight, but really, not the end of the world. The flight to SEA was pretty easy (I may have even slept part of the way, hard to say, but the trip seemed pretty short), and then the flight from SEA to ANC was pretty easy too, though there was definitely snow gnarly turbulence once we started the decent. It was awesome to look out at the weird land beneath us…. and then realize that it was the ocean, but frozen. Once we actually did get to land, it was still pretty awesome though – everything covered in snow and surrounded by huge mountains. Zach wasn’t on the second flight with me, and I got in early, so while waiting I grabbed a beer and picked up the rental car. The guy at Enterprise would give me an upsell pitch (“Do you want a GPS?”) and then when I said no would come back with a fairly honest answer (“Yeah, you don’t really need it, there’s only one road”). I immediately met Zach at baggage claim, and we headed towards Girdwood, arriving in about 40 minutes. Not too bad, and the drive was pretty awesome along the water.

When we got to the resort, it was 37 degrees and raining at the bottom, which definitely wasn’t a good sign. We lamented a bit about how you just can’t plan a ski vacation that effectively, since it’s so dependant on the weather, but hey, what can you do? We ate dinner, and walked around to check things out, and luckily I noticed that because we are so far north, and it’s winter, the sun doesn’t rise until much later than we are used to, and in fact the lifts don’t start spinning until 10:30am. That being super awesome, we went to bed and….

Woke up to 16″ of fresh at the top, less in the middle, and basically slush at the bottom, which was fine because the top certainly made up for it. The tram didn’t get going until about 11:15 or so due to avalanche control, but once it did we managed to go top to bottom somewhere around 10-12 times, and at 2200ft each – that’s a lot of vertical. The upper North Face wasn’t open, so we couldn’t do Christmas Chute or the High Traverse, but there were still plenty of good to be had, especially in the trees. Hoping that they get the top open tomorrow, how bad ass would it be to get freshies two days in a row? And it hasn’t stopped snowing all day, and in theory will keep it up until tomorrow. With some luck, it will clear up for my heli trip on Wednesday.